The history of Litochoro is centuries old, continuous  and uninterrupted over time. It’s sources: myth and tradition. It is said to have been founded by the inhabitants of ancient “Pimbleia”, a small town to the south, a worship center of Pimbleades Muses, which belonged to the famous city of Dion. Built on the banks of the river Enipeas, that settlement was destroyed by its waters, forcing the inhabitants to settle in the present location of Litochoro. 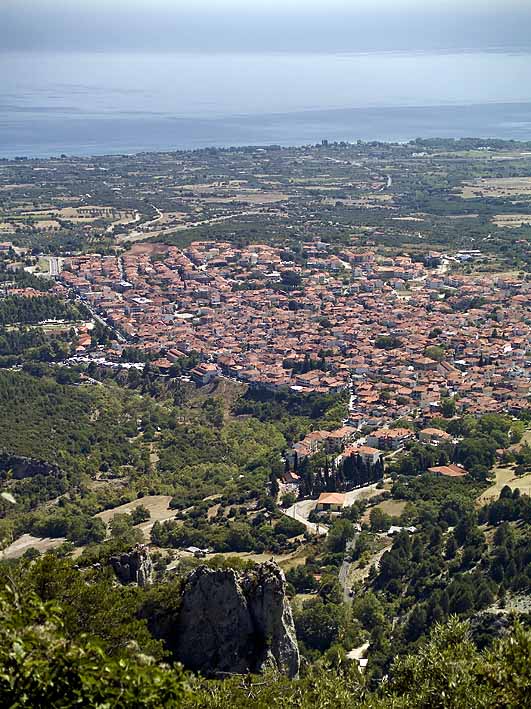 The last faithful people in the cult of the Dodecanese of Olympus were christened when Emperor Theodosius of Byzantium sent Christian islanders as settlers, bringing with them the naval tradition. During the Turkish occupation over a hundred sailboats belonged to the inhabitants of Litochoro.

The exact time of Litochoro’s creation is unknown. Its roots, however, according to tradition, date back to 1540 AD when Saint Dionysios arrived here and built the famous monastery. Since then the city and the monastery have followed a common historical course. Olympus, the Monastery of Agios Dionysios and Litochoro became the refuge of the revolutionists of the area, against Othomans. From here passed the great teacher of the Greek genre Kosmas Aitolos. On the beach of Litochoro Greek Hero Nikotsaras landed, finding heroic death in 1807 in an attempt to revolt the area. The inhabitants of Litochoro actively participated in the liberation struggle of 1821.

In Litochoro the first revolutionary government for the liberation of Macedonia was formed in 1878 under the presidency of Evangelos Korovago and the Olympus revolution began. Litochoro sailors Nikolaos Vlachopoulos and Michael Kofos led the liberation wars of 1912-1913 to Admiral Nikolaos Votsis in the Thermaikos Gulf, where he torpedoed the Turkish fleet’s flagship. On the slopes and gorges of Mount Olympus, national resistance was nestled in World War II.

The name of the city is also associated with the myth and history, but also with the natural environment. According to one version, as the legend says, it was called Litochoro because the beautiful Lito, who bathed in the waters of Enipea, had her home here. In another version, the Litochoro script is due to the plain space of the Byzantine word “simple”, which means prayer. It may have come from the name Lithochoro ( lithos means “stone”). Maps of Macedonia in the 16th and 17th centuries refer to the ancient Greek name Lissas from the Homeric “lis”, meaning rock or cliff, bare and smooth stone. There is also the scripture Lytchoro, in the sense of the “free” free-country, which has enjoyed Turkish domination. Finally, there is the notion that Litochoro simply means simple and chaste space, which also refers to the sanctity of space.

The text (excerpt) is from a tourist brochure of the Municipality of Litochoro in October 2003.